[ENG] On September 1-2, the Law School of the University of A Coruna (UDC) hosted the International Conference ‘Changing Landscapes of Immigration Detention’, which gathered some 50 scholars from a wide number of African, American, Australasian, and European countries. This workshop was chaired by Ana Ballesteros (ECRIM) and Cristina Fernández-Bessa (ECRIM) and it was the closing activity of the Marie Curie project ‘Governmigration’ which was granted by the European Research Agency to Dr Ana Ballesteros (2018-2021). The conference was jointly organised by ECRIM, the Center of Criminology and Socio-Legal Studies of the University of Toronto, Canada and the Complutense University of Madrid, Spain. 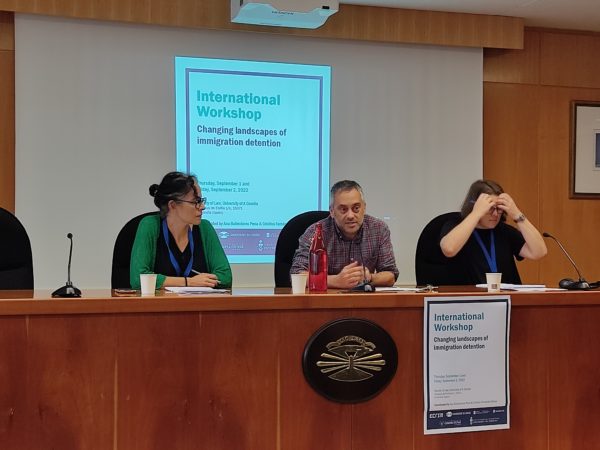 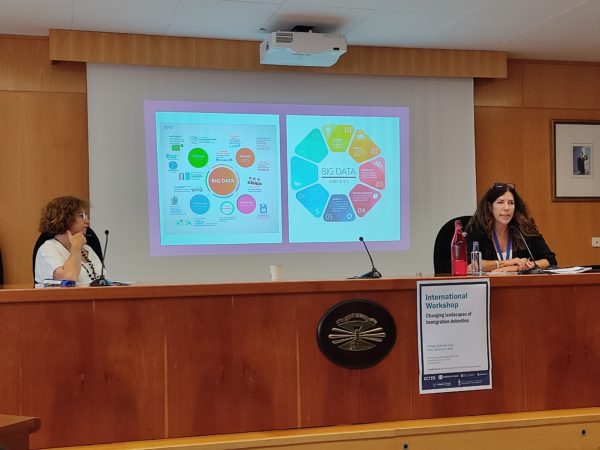 On Thursday, September 1 the conference was opened by the Dean of the UDC Law School and ECRIM member, Xulio Ferreiro, and the two academic chairs, whose introduction speech was followed by the first plenary lecture, given by Kelly Hannah-Moffat (University of Toronto). Prof Hannah-Moffat presented a paper called ‘Automated decisions, risk and the ‘datafied subject’ in criminal justice and immigration control’. 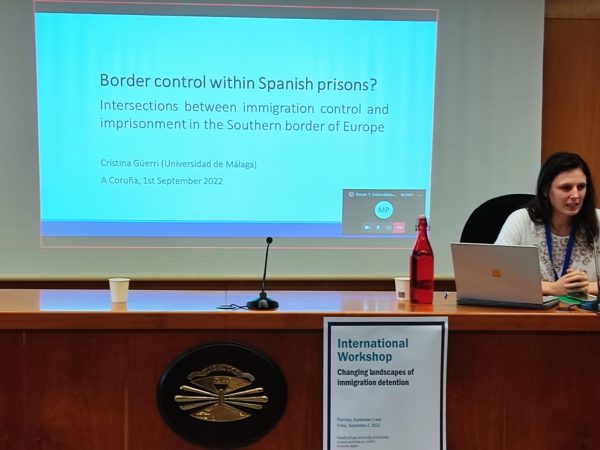 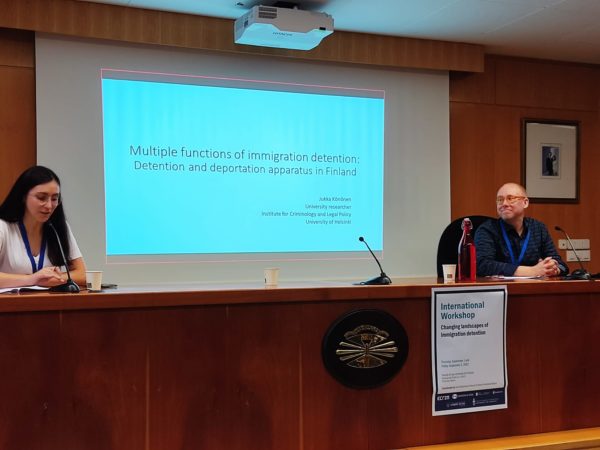 Two parallel panel sessions completed the pre-lunch session. Session 1A gathered the presentations ‘Border control within Spanish prisons? Intersections between immigration control and imprisonment in the Southern border of Europe’, given by Cristina Güerri (University of Malaga, Spain) and ‘Multiple functions of immigration detention: Detention and deportation apparatus in Finland’, made by Jukka Könönen (University of Helsinki, Finland). 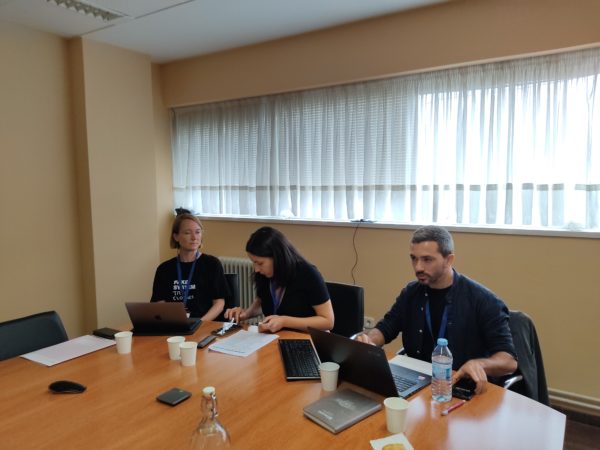 In session 1B, in turn, Gustavo de la Orden (University of Deusto, Spain) presented his paper ‘”Pre-entry screening procedure”, a new form of immigration detention in the EU Pact on Migration and Asylum: The Spanish borders as a policy laboratory’, whilst Aino Korvensyrjä (University of Helsinki, Finland) reflected upon ‘Alternatives to detention in Germany: Duldung, semi-open camps and contested enforcement after 2015’ and Ivana Belén Ruiz Estramil (University of the Basque Country, Spain) talked about ‘From Migrant Classification Centres to the outsourcing of the responsibility to protect’. 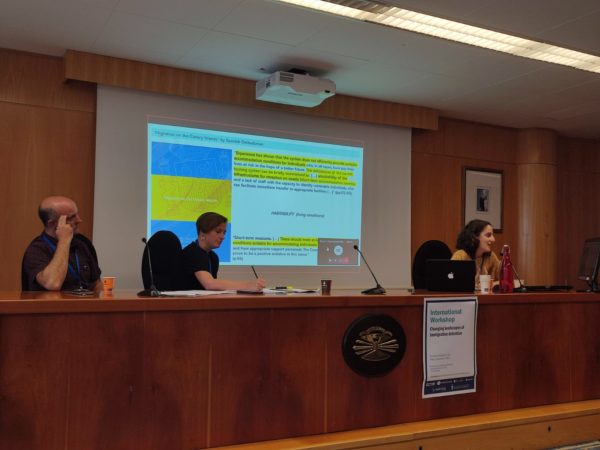 Subsequently, in session 2A Elena Enciso (University of Málaga, Spain) made her presentation ‘Migratory temporary spaces and their impact on the people who inhabit them: definition and minimum parameters of habitability quality Spain’ and Julia Manek (University of Frankfurt, Germany) gave her talk ‘Detention & deterrence from the global to the intimate – the production of torturing environments at external[ized] borders: EU, Australia, Japan, Turkey and Greece’, whereas Gregory L. Cuéllar (Austin Presbyterian Theological Seminary, US) intervened remotely to present his paper ‘The Carceral Logic of Religious Spaces in Immigration Detention US/UK’. 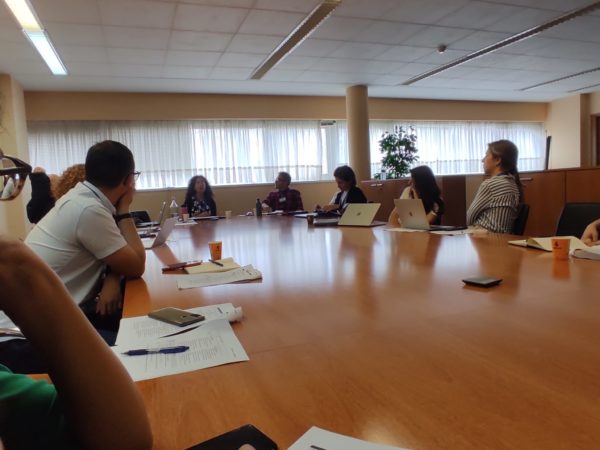 Simultaneously, session 2B had as well three presentations: ‘Elimination Through Migration and Crime Policies in the United States’, by Yolanda Vazquez (Cincinnati School of Law, US), ‘From Prisons to Camps to Prisons: The Institutionalization of Immigration Detention in Germany’, by Sabrina Axster (Johns Hopkins University, US), and ‘Detention for Illegal Entry and Deportation Practices in Spain, 1955-1980’ by Ariela House (independent researcher, Spain). 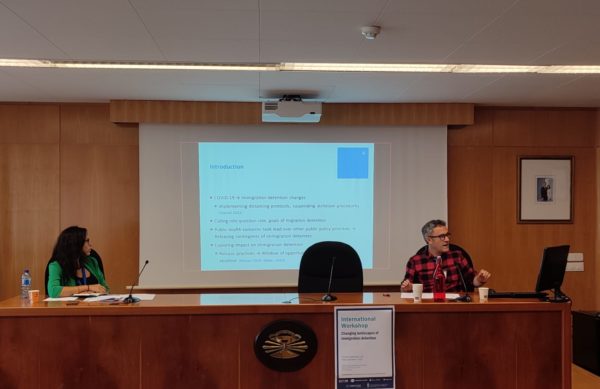 From left to right: Giulia Fabini, José A. Brandariz 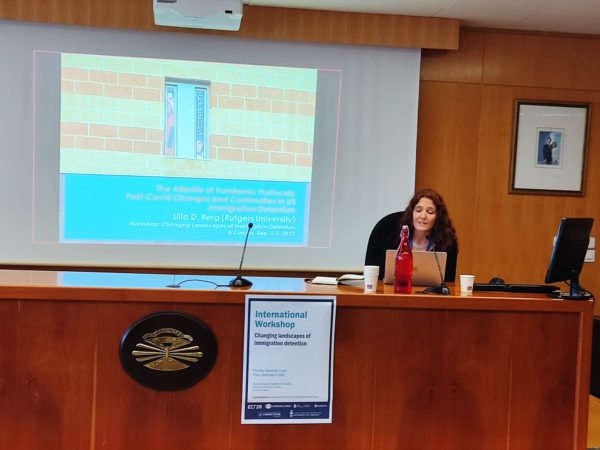 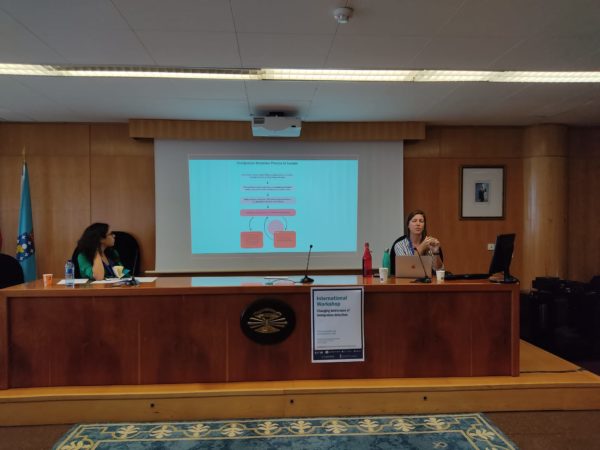 Two additional parallel panel sessions were held in the first day of the conference. In session 3A, José A. Brandariz (ECRIM) presented his paper ‘Coronavirus and Immigration Detention in Europe: The Short Summer of Abolitionism?’, whilst Ulla Berg (Rutgers University, US) gave a talk on ‘The Afterlife of Pandemic Protocols: Post-Covid Changes and Continuities in US immigration Detention’, and reflecting as well on detention policies and coronavirus-related measures Molly Joeck (University of British Columbia, Canada) made her presentation ‘Back to business as usual: post-pandemic immigration detention in Canada’. 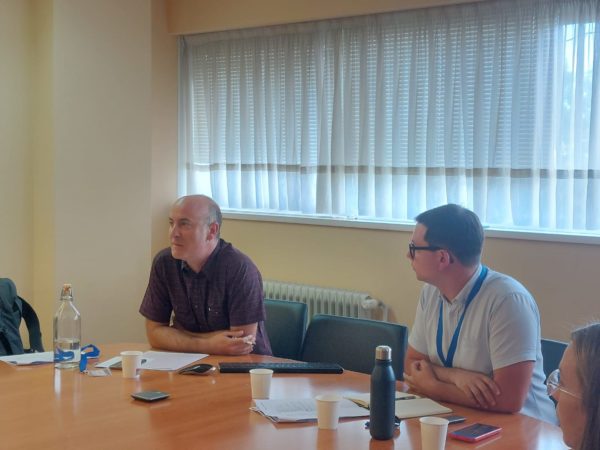 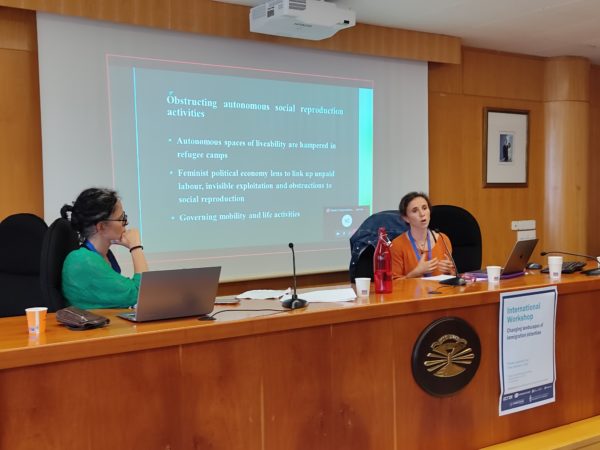 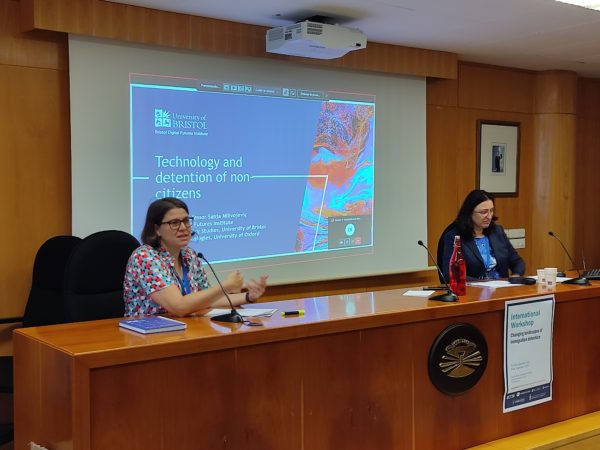 On Friday, September 2 the second day of the international workshop was opened by the last plenary speech. Sanja Milivojevic (University of Bristol, UK) gave a talk on ‘Technology and detention of non-citizens’. This plenary activity was followed by a day-long of parallel panel sessions. 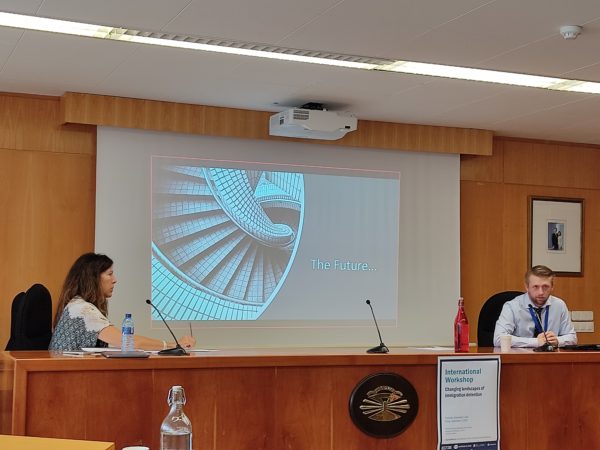 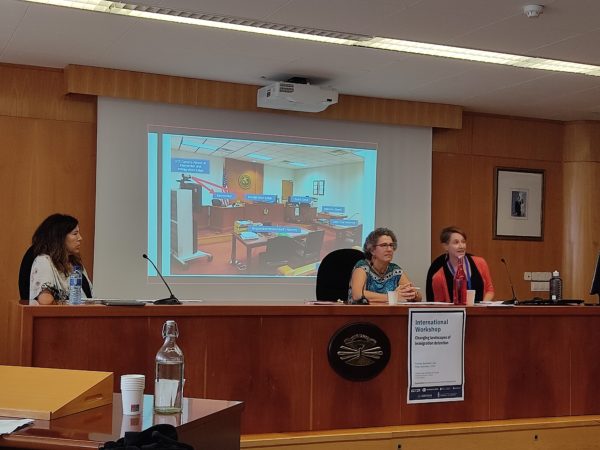 Session 4A, which was focused on immigration detention and technology, hosted three presentations: ‘Landscapes of Digital Detention: changes and continuities in the deployment of electronic monitoring as “alternatives to detention” in the USA’ by Carolina Sánchez Boe (Aarhus University, Denmark), ‘Artificial Intelligence and the Future of Immigrant Detention Systems’ by Justin Iverson (University of Nevada, US), and ‘Credibility assessments in humanitarian protection cases adjudicated by video’ by Liz Bradley (University of Pennsylvania, US) and Hillary Farber (University of Massachusetts, US). 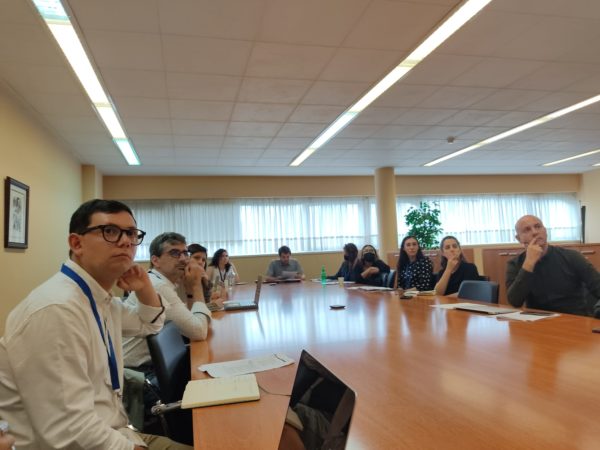 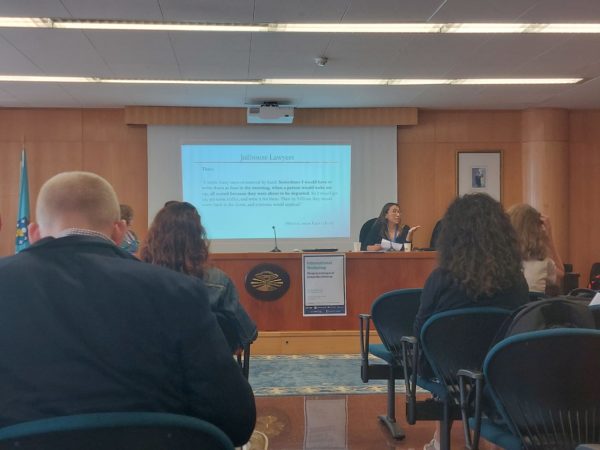 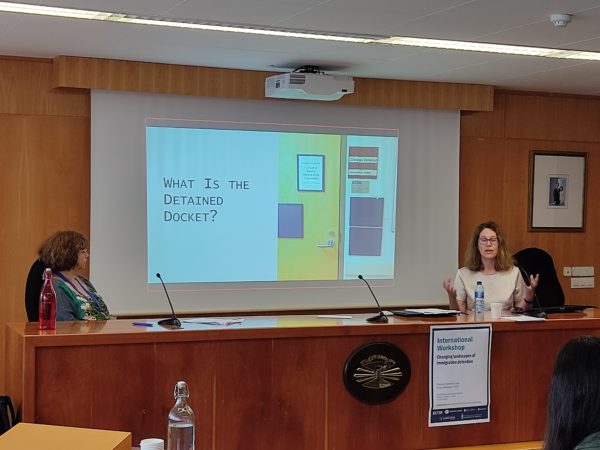 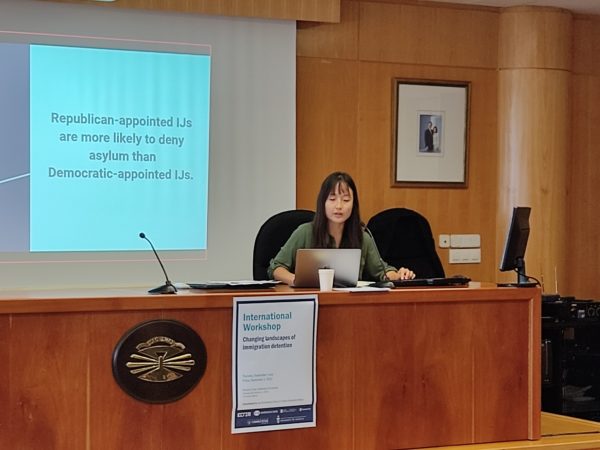 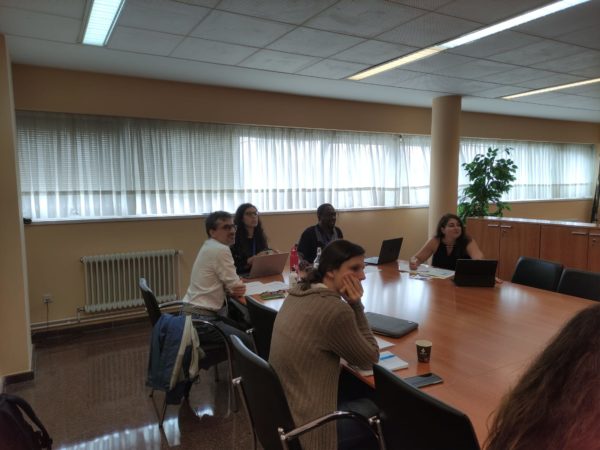 In a different room of the venue, Emmanuel Maravanyika (Witwatersrand University, South Africa) made a presentation on ‘Practices of detention, containment and exclusion: Exclusionary practices against migrants in parole processes by the South African Department of Correctional Services’ and Dale Ballucci and Sam Ghebrai (Western University, Canada) presented their paper ‘Rationalizing Crimmigration: Examining Canada’s Use of Correctional Facilities as Immigration Holding Centres’ in session 5B. Also in this session, Giulia Fabini (University of Bologna, Italy) gave her talk titled ‘Innovations and continuities in immigration detention in Italy: the need for a diachronic, multi-sited and multi-scalar analysis’. 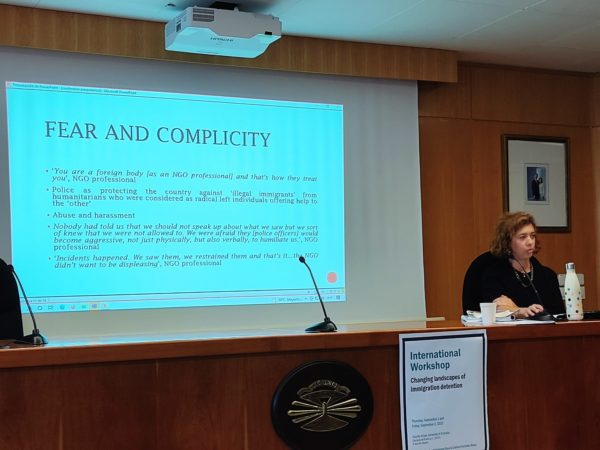 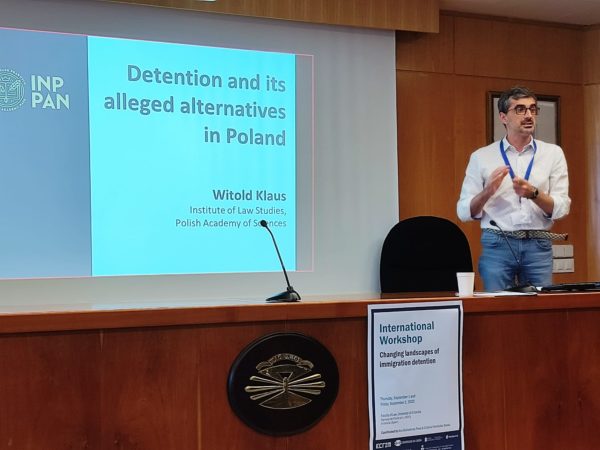 Immediately after lunch, session 6A brought together three additional papers: ‘Silences and complicities between state and non-state actors in the Greek immigration detention system’ by Andriani Fili (University of Oxford, UK), ‘Detention and its alleged alternatives in Poland’ by Witold Klaus (Polish Academy of Sciences, Poland) and ‘Sick economies: Scrutinizing change, malleability, and the enduring presence of U.S. immigration detention’ by Deirdre Conlon (University of Leeds, UK) and Nancy Hiemstra (Stony Brook University, US). 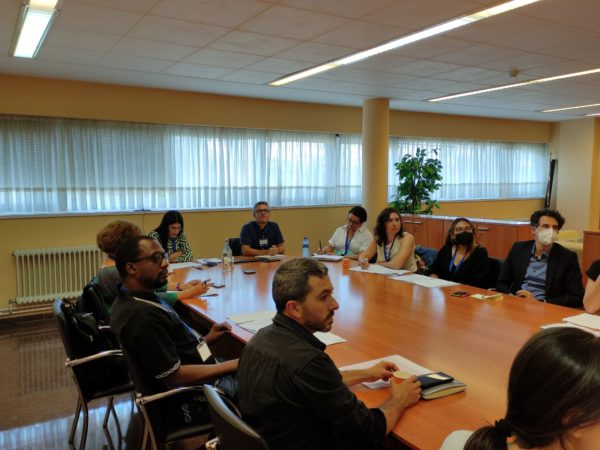 Simultaneously, in session 6B Simon Wallace (Osgoode Hall Law School, Canada) presented his paper titled ‘An empirical study of ‘danger to the public’ immigration detentions in Canada (summer 2021)’, Natalia Torres (University of Vigo, Spain) made a presentation on ‘Understanding crimmigration practices in Spain: “preventive internment” of immigrants as a manifestation of ius puniendi’, and Lorena Avila (Rutgers University, US) gave a talk on ‘Latino until proven innocent: The mark of criminal history in bond hearings in U.S. Immigration Courts’. 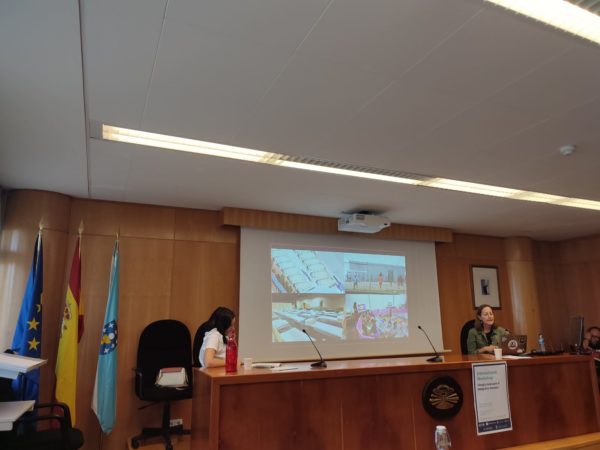 Finally, two additional panel sessions hosted the last presentations of the conference. Session 7A brought together papers presented by North American scholars: ‘From Detention to abolition: The care of unaccompanied children in the United States’ by Lauren Heidbrink (California State University, US), ‘”Where’s the Protection? Investigating the Potential for ‘Crimmigration’ of Refugee Children’ by Dale Ballucci (Western University, Canada) and ‘Zero-Tolerance at the U.S. Border: Understanding the Impact and Consequences of Family Separation’ by Mercedes Valadez (California State University, US). 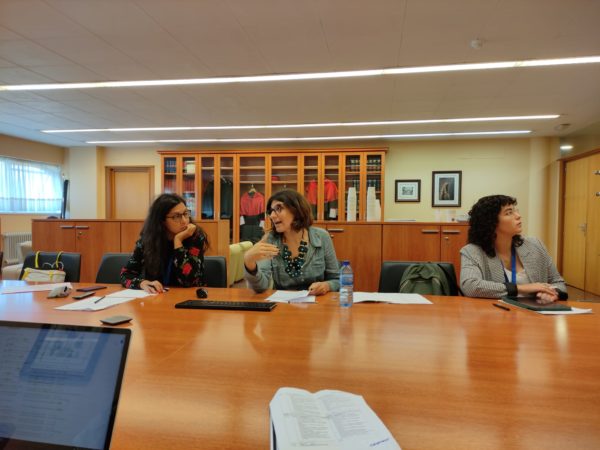 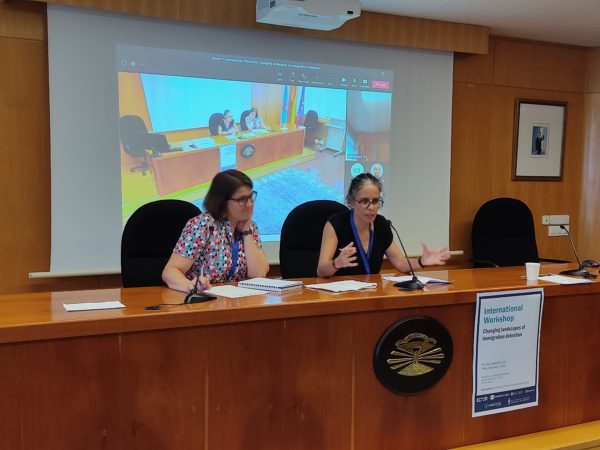