International Conference “Beyond Neoliberalism? Politics and Punishment in Contemporary Societies”

The Law School of the University of A Coruña hosted on 3-4 October an International Conference, organised by the ECRIM research group and entitled “Beyond Neoliberalism? Politics and Punishment in Contemporary Societies”. 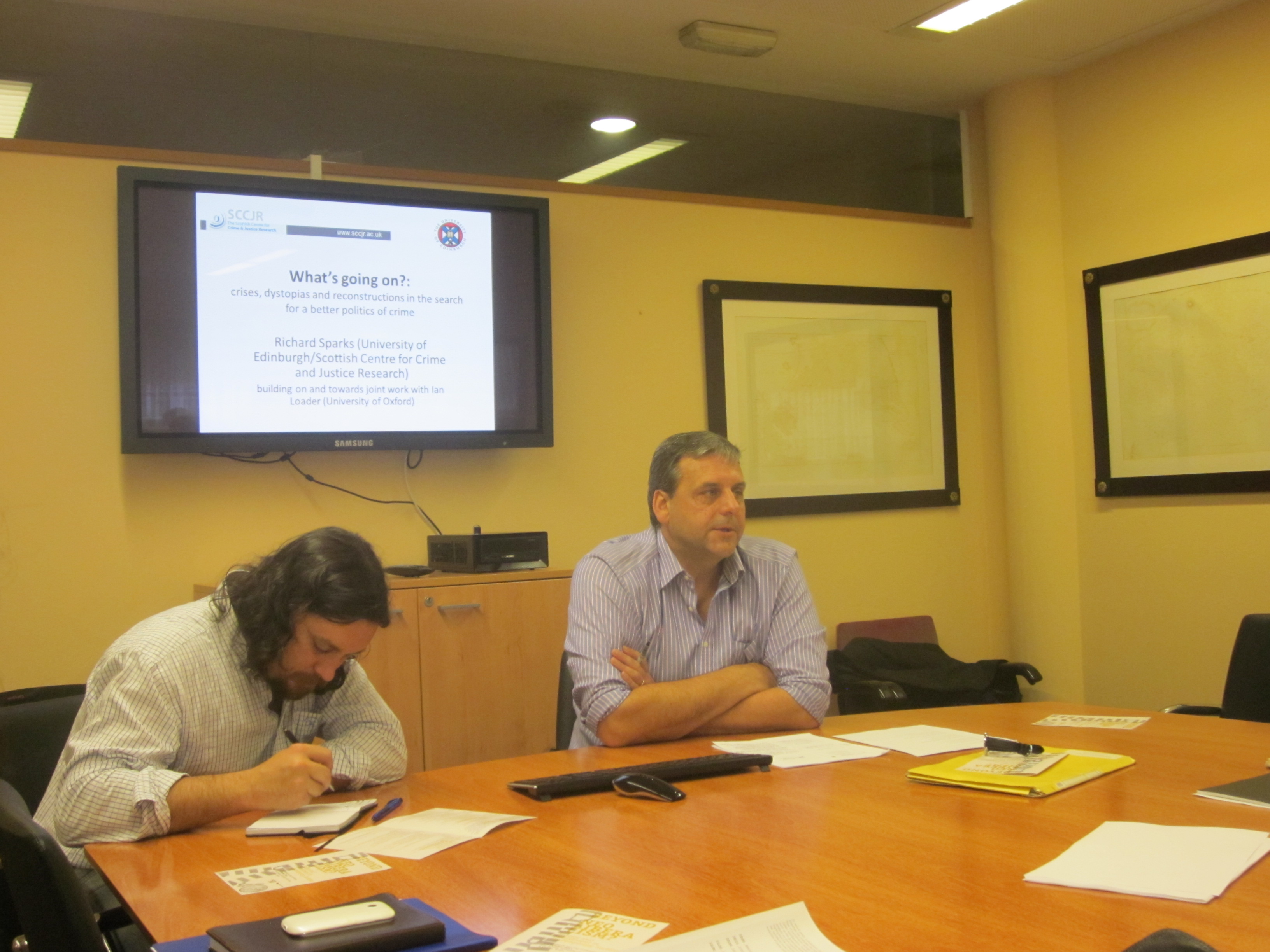 The first day of the Conference (Thursday, October the 3rd) began with a lecture given by Richard Sparks (University of Edinburgh, UK), entitled “What’s going on? Some legitimation problems of the ‘neo-liberal’ penality”. The Conference continued with a lecture given by Emma Bell (University of Savoy, France) reflecting on “There is an alternative: Challenging the logic of neoliberal punishment”. A panel session on “Great Recession and Criminal Justice” followed Emma Bell’s lecture. A presentation on “Punish and discipline? Penitentiary Jubilee and extended expulsion in the Iberian neo-liberalism”, given by Daniel Jiménez Franco (University of Zaragoza, Spain), opened the panel. Then José Ángel Brandariz (University of A Coruña, Spain) presented a paper on “Great Recession and Criminal Justice: Bad times for criticism?” (Presentation). The first day of the Conference finished with a third panel session, entitled “Neoliberal Penality, Social Harm and Economic Crime”. The panel hosted a presentation given by Alejandro Forero (University of Barcelona, Spain) on “New ‘crisis’ and the production of harm: Which ungovernability?”. Then Claudio González (University of Malaga, Spain) lectured on “The influence of neoliberalism in Latin America’s criminal justice systems: The construction of a managerial paradigm in Chile and Costa Rica”. Finally, Rita Faria (University of Porto, Portugal) closed the panel presenting a paper on “Crisis, crime and criminology: Reflection on harms caused by the economic crisis and economic crimes in Portugal”. The second day of the Conference began with a lecture given by Leonidas Cheliotis (University of Edinburgh, UK), entitled “Pessimism of the Intellect, Optimism of the Will: Redefining the Contours of Neoliberal Penality”. Leonidas Cheliotis’ lecture was followed by a panel session on “Great Reecession, Resistance and Punishment”. In the framework of this panel, Ignacio González (Complutense University of Madrid, Spain) presented a paper on “Penalizing the Protest: Neoliberalism and the management of resistances”. Discussing on the same topic, Manuel Maroto (University of Castilla La Mancha, Spain) gave a presentation on “Criminal justice and the repression of political dissent: Some current trends in Spain”. The last lecture of the Conference was given on 4 October by Máximo Sozzo (National University of the Litoral, Argentina), reflecting on “Beyond the punitive turn? Postneoliberalism and punishment in Argentina”. In order to also examine the contours of penality in Latin America, Máximo Sozzo’s lecture was followed by a panel session which gathered two presentations given by Argentinian researchers. On the one hand, Anabella Museri (CELS, Argentina) presented a paper written by her and Paula Litvarchky entitled “Breaks and continuities in Criminal Justice: The reform of the flagrancia concept in Buenos Aires province”. On the other hand, Alejandra Otamendi (University of Buenos Aires, Argentina) gave a presentation on “Public support of punitive policies at the Metropolitan Area of Buenos Aires (2000-2010)”.